Traditionally, nuclear physics includes not only research related to the structure of the atomic nucleus and nuclear reactions, but also the entire physics of elementary particles, as well as partly some sections of astrophysics and cosmology. Currently, the efforts of our group are concentrated in the field of so-called non-accelerator experiments in elementary particle physics.

GERDA (GERmanium Detector Array) experiment, marketed at the Gran Sasso National Laboratory in Italy, designed to search for Ge-76 double neutrino-free decay. GERDA uses detectors from Germany enriched in the Ge-76 isotope. The detectors are immersed in liquid argon, which cools them to a working temperature (87 K) and, at the same time, serves as additional protection against background radiation. The experiment is carried out in several stages or phases. At the moment, the second phase of the experiment is over and a third is planned. 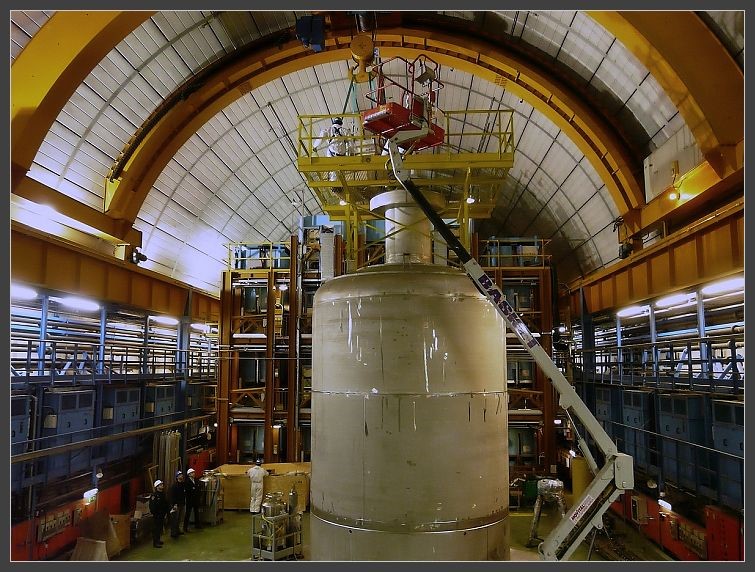 However, with an increase in the accuracy of the experiment in the following phases, one of the sources of background events may be the interaction of 76Ge with neutrinos from the sun. Members of the group deal with this problem in collaboration with specialists from the Kurchatov Institute. This study is based on preliminary calculations of group leader Inzhechik Lev Vladislavovich (he is a member of the GERDA collaboration).

Middle and top layer detectors rest on a wooden frame. Frame leans on the bottom layer. On top of the assembly of three layers is covered with lead screen.

The Troitsk nu-mass facility is one of the few world-class experiments in Russia in the field of particle physics. The purpose of the experiment is to search for masses of both active and sterile neutrinos. The results obtained at the installation are currently the best in the world.

Today, there are many unsolved mysteries in the physics of atmospheric lightning discharge. The key one is the problem of lightning initialization: despite the fact that the dynamics of the formation of lightning has been studied in detail, it is not known how the process of development of a lightning discharge begins. To start the formation of lightning, an electrical breakdown is required inside a thundercloud; however, the electric fields observed in the atmosphere are an order of magnitude smaller than the breakdown fields.

Another unexplained phenomenon of atmospheric electricity is gamma-ray bursts observed since 1994 by space gamma-ray observatories (for example, BATSE, Fermi), created for observing gamma radiation from astrophysical sources. Mysterious natural gamma radiation of the earth's atmosphere is called Terrestrial Gamma-ray Flashes (TGFs). It is remarkable for its short duration (on the order of hundreds of microseconds) and high intensity of gamma radiation. Building a consistent TGF model is one of the key challenges for modern scientists.

Long-term observation of TGF made it possible to establish that, apparently, this natural phenomenon is based on the acceleration of relativistic electrons in the electric fields of thunderclouds. It turns out that in thunderclouds it is possible to form such a large-scale electric field, which is capable of accelerating electrons more than they are decelerated when interacting with atmospheric air. This phenomenon was predicted by the Russian scientist A.V. Gurevich in 1992. Relativistic electrons accelerated by an electric field are called runaway, and the minimum electric field at which the runaway of electrons is possible is called critical. Runaway electrons interacting with air molecules knock out new electrons, which can also become runaway. This process leads to the formation of an avalanche of runaway electrons ([Figure 3] (# tgf_3)). The seed particles for such avalanches are generated by secondary cosmic rays. Avalanches of runaway electrons interacting with air create bremsstrahlung gamma radiation. Spectral analysis of TGF has shown that it is the phenomenon of runaway of relativistic electrons in thunderclouds that is the most likely source of terrestrial gamma-ray bursts. Nevertheless, the construction of the TGF model requires a deeper study of the physics of runaway electron avalanches.

Gamma radiation from thunderclouds is observed not only from space. There are many ground-based observatories studying this natural phenomenon. One of them - Aragatz station on the mountain of the same name in Armenia. Research at the station is carried out by the Cosmic Ray Division of the Yerevan Physics Institute, under the leadership of A. Chilingaryan. The high-altitude location of the experimental complex is convenient for studying thunderstorm clouds, since they pass at a height of one hundred meters or less above the experimental facilities. An important feature for thunderstorm physics of this experimental complex is its location just a hundred meters from the height of thunderclouds. This provides important experimental data on atmospheric gamma radiation. The phenomenon observed on Mount Aragatz was named Thunderstorm Gamma Enhancement (TGE). Its duration, in comparison with TGF, is long, about 30 minutes. Analysis of the TGE observation data showed that it mainly consists of a gamma-ray study of the decay of daughter radon nuclei, which rise with aerosols due to the electric field between the earth's surface and the thunderstorm. This is the soft component of the TGE; the energy of gamma quanta of the soft component does not exceed 3 MeV. However, periodically, powerful fluxes of the hard component of gamma radiation appear in the TGE, the energy of which reaches 100 MeV. The duration of such flashes is about 100 milliseconds, as a rule, they are interrupted by a lightning discharge. It has been reliably established that the source of the hard component of the TGE is an avalanche of runaway electrons accelerated by thunderstorm electric fields.

The study of the dynamics of runaway electron avalanches is not limited to the study of their gamma radiation. Fluxes of relativistic electrons also cause an increased level of ionization within the thundercloud. Increased ionization can significantly contribute to the streamer and leader formation processes that underlie lightning initiation. In addition, thunderclouds are a source of VHF radiation. To register ultrashort waves, the Aragatz station is equipped with an interferometer. It is assumed that relativistic particles are also capable of causing processes that lead to VHF radiation. The study of plasma processes associated with the ionization of runaway electrons, together with the analysis of data from VHF interferometers, will shed light on unexplored phenomena of atmospheric physics.

Researchers from the Laboratory of Nuclear Physics Methods have developed a prototype detector for solar cosmic ray spectroscopy. The customer for the work was the Space Research Institute of the Russian Academy of Sciences. A prototype detector was assembled and tested at the Institute for Nuclear Research, Russian Academy of Sciences. Research results are published in JINST.

Structurally, the detector is a scintillation cylinder segmented into several washers. The energy release of the particle passing through the detector is removed from each washer separately. This design makes it possible to reconstruct the loss curve of registered particles, which increases the energy resolution of the detector in comparison with classical calorimeters. Moreover, due to segmentation, the detector is able to operate in the so-called integral mode. In this operating mode, the detector records the total loss curve from several incident particles during the exposure. The laboratory staff showed that using the Turchin regularization method, it is possible to reconstruct with good accuracy the spectrum of particles registered by the device from their total loss curve. Integral mode allows the detector to operate when the frequency of particles hitting the detector exceeds the readout speed of the electronics. This gives the device an advantage over existing solar cosmic ray spectrometers.